If you’re lucky enough to own a Hollywood Regency home, you’ve got your hands on a true LA classic, just waiting for a top quality home renovation to restore its former magnificence.

What Does the Hollywood Regency Home Represent?

Here’s a lesser known Tinseltown tidbit: it was actually a silent-film star that later became a decorator, William (Billy) Haines, who was a pioneer of the Hollywood Regency style, a look that famously conjures a sense of escapism, glamor and elegance.

It’s important to remember that the Hollywood Regency style incorporates aspects of both architecture and interior design. While the style itself can be eclectic and not strictly definable, evoking sophistication and glamor are always paramount.

In a sense, Hollywood Regency melds 19th-century French, Greek Revival, and Modernist elements to establish an elusive style that is entirely its own, one that was much sought after by some of the biggest stars, such as Katherine Hepburn, Cary Grant and Errol Flynn.

The assortment of various design expressions might sound potentially confusing to the eye, but the ultimate effect makes for a surprisingly attractive result.

A true Hollywood Regency home will represent a departure from the white stucco haciendas and half-timber Tudor-style homes often found on large lots near Sunset Boulevard, built by stars and studio bigwigs before tax and the Depression dictated a bit more austerity.

The major design scheme revolves around entertaining. Think colored version of a mid-30s black and white film set, and you’ve getting the idea. Mix in classic mirror panels around the fireplace, double doors, some banquette-style seating, long, low sofas and streamlined but impressive built-in bookshelves, and you and your home renovation expert are well on your way. Here are a few more ideas:

Lush landscaping and a courtyard fountain might typically complete the look of a Hollywood Regency home’s outdoor surroundings and ambiance.

Billy Haines also utilized Neoclassical elements (such as the Greek Key design, for example) to round out his vision of Hollywood style. Think Asian accents meet Golden Age; bamboo and palm fronds, maybe even a pagoda or two. Comfortable chairs, lampshades or even wallpaper all might feature Chinoiserie patterns. The overall aim is to establish a glamorous and worldly look.

A Hollywood Regency home renovation is an inspiring project fueled by pride and nostalgia. Tell any experienced home décor specialist that you’re looking to refurbish a Hollywood Regency house to recapture and reflect its traditional look and feel: eyes will widen with excitement and creative ideas bubble out faster than you can say “cocktail party at my place.“ 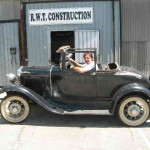 “Romney Tripp started construction in 1977 and formed RWT Design & Construction in 1992, eventually setting up the shop in Burbank. From the mid 1980’s Romney has been working on building recording studios as well as… Read more.”

Creative Commons Attribution: Permission is granted to repost this article in its entirety with credit to RWT Design & Construction.

Romney, thanks for making our home a better place to live. John's craftsmanship is excellent!

RWT was on top of every aspect of our job/ remodel. Romney was very involved from the beginning of the project until completion. We will definitely work with Romney and...

RWT construction is an excellent contractor, we have been very happy with his work.

I purchased my first condo in during Fall of last year and had several things I wanted updated and/or fixed, including but not limited to: bathroom light/fan fixtures, installation of...

I have had the benefit of RWT's first rate work for a number of years. Romney was recommended to me in 2005 by a highly regarding water leak specialist when...

WE ARE ON INTUIT PAYMENTNETWORK

Call for a Free Quote
We use cookies to ensure that we give you the best experience on our website. If you continue to use this site we will assume that you are happy with it.OkNo
You can revoke your consent any time using the Revoke consent button.Revoke consent